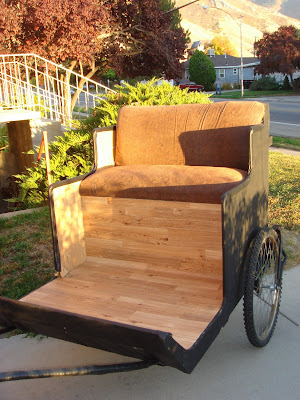 The other day I was on BYU Campus heading to the art museum and I see a bicycle ride by me with a pretty awesome little coach attached to it. The rider was moving to quickly for me to ask him any questions or, at least, get a picture. A few days later I am at a local bicycle shop and the same rider and bicycle comes into the shop. I got to talking with the rider and found out his name is Jake Bigler and he had built the entire set up himself. He had welded all the welds hammered all the nails and wired all the batteries and motors. Now my interest was really peaked so I asked if I could get a quick introduction ride and, being the nice guy that he is he said, “Yes,” and we were off. The little coach is really really comfortable and is pretty quick as well. He took me to a side street with a decent little uphill section the bike and rider took it smoothly and easily. Jake has wired up two motors to the front tire which produce about 3 horses of power. That may not sound like much but when you add a strong rider to the mix you can get the whole rig moving pretty fast (he has taken two passengers up the hills around the Temple).

On top of speed and comfort Jake has wired in some speakers, he had his ipod hooked up but said you could just as easily bring your own with your own special mix or music. After the ride I asked him why he built such an awesome bicycle? He told me, “Last fall I did not have a job so I decided to make a job.” With that he handed me a card gave me a firm handshake and rode off. Personally I plan on giving Jake a call in the next few days to take my sweetheart and me for a ride on the Provo Trail. He charges $20 an hour which, will get you a pre-determined ride or any custom ride you can come up with. You can get in touch with Jake at his website thelittlecoach.blogspot.com, it has all his information and pricing, or just give him a ring 801-615-5588. It is great to see something like this pop up in Provo. It also beats those same old boring date ideas that everyone has heard over and over. Give Jake a call and go for a ride.

2 thoughts on “The Little Coach”